How to Write a Chess Book and Make Loads of Dosh

I feel impeccably qualified to write this article because:

a) I have never written a chess book, and

b) I am not a particularly strong chess player.

The would-be author should bear in mind the following points:

(1) The most important parts of any book are the front and back covers. Choose a title that is positive, aggressive, and crucially, that is completely biased. Poor choices would be:

‘How to Almost Gain Equality with the Grunfeld’

Let us suppose you decide to write an openings book (a sensible decision given the number of people who change their opening whenever they lose a game). On the back cover emphasize the dynamic, attacking nature of the opening (even if it’s a boring one like the French). And just in case a few potential buyers are frightened off by tactics, mention the existence of more positional lines. It is useful to claim (honestly or otherwise) that you are: World Champion a Grandmaster an International Master. Failing this, as long as you have played in one international tournament you can claim to be an ‘international player’. Alternatively you can emigrate to the USA and become a ‘master’, for which I am told that a barely positive BCF grade is required. As a final resort, adopt a long and impressive Russian name as a pseudonym. Substantiate your east European credentials by studying the sentence structure of Russian émigrés.

‘Always start your book with a section on Nimzowitsch’

(2) If you have picked an opening which you actually play yourself and may know something about, then return to Step 1 and try again.

(3) Always start your book with a section on Nimzowitsch. Find, or make up, a few games he played with your opening. This is quite safe because it will be difficult for anyone to disprove that a dead player played a particular (preferably obscure) game. This is useful because it: a) uses up a whole chapter; and b) suggests your opening has a pedigree – most players will be unaware that Nimzowisch played the dodgiest openings available.

‘Evaluating positions should be avoided at all costs’

(4) The next stage is to collect the last couple of Informators and look for games played and annotated by strong well-known GMs. This will form the basis of the book. Each of the remaining chapters will contain two or three of the above games. This format has many advantages:

a) almost all notes can be plagiarized from (sorry, attributed to) eminent players;

b) any theoretically dubious lines in your chosen opening can be simply ignored and omitted; and

c) by stressing the importance of middlegame and endgame ideas you can minimize the analysis which actually focuses on the opening.

‘and according to Keres, Black’s position is definitely not worse’

This should be avoided at all costs. Aim instead to give gamelets where the opposite colour makes a series of horrendous moves and loses very quickly. If you feel you really must give an evaluation, then quote someone else. A fine example is used by Suetin in his epic book on the French: ‘and according to Keres, Black’s position is definitely not worse’. Keres had risked an evaluation, but notice how skilfully he kept it suitably vague. The following phrases may come in handy: ‘with roughly/approximately even chances’, and ‘with chances for both sides’.

Quote freely other people’s analysis, but it is imperative not to risk any of your own lines. Useful cop-outs are: ‘with double-edged play’, ‘needs further tests’, ‘with an unclear position’, and ‘with compensation’ (no need to mention whether this is adequate or not).

‘Include plenty of waffle about development, the centre, mobility’

(7) The best answer to the problem of analytical rigour is to indulge in suitably basic and irrelevant strategic explanation. Include plenty of waffle about development, the centre, mobility, etc. Avoid mentioning any specific plans as these may be shown to be dubious.

Use them to pad out the book a bit. However, a word of warning: if you include too many diagrams some players will be able to read your book at the bookstall or bookshop, without needing to buy it.

(9) The experienced bluffer may also resort to a few incongruous quotes, or venture some superfluous historical description. Use such devices near possible analytical flaws, in order to distract the more discerning reader.

(10) Studying books by certain contemporary writers may help you to grasp the above points. However, the following authors should probably be avoided:

John Watson – too much of own analysis, too many original ideas;

Jon Speelman – clearly puts too much time and attention into writing a book.

Once you have mastered these techniques a little practice should enable you to write a book in few days, or perhaps in just an afternoon. 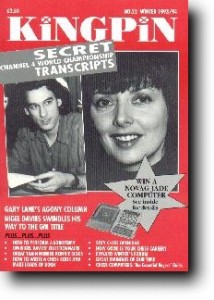